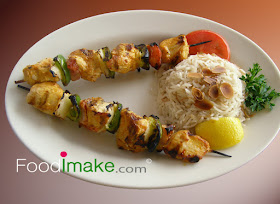 Shish tawoke or what largely known as chicken kebab as well, this is a main dish in the middle east. Years back i use to be a mainly known in Syria and Lebanon, however become widely famous as healthy, protein source with very delicious taste.

Furthermore is an excellent fast food sandwich, served in pita bread with Hummus and tomato !!! Also this recipe could be cooked on charcoal grill, oven or skillet, each method has it's own delicacy, however you may like them all as I do. As in plate, could be served with rice, hummus or on top of green salad. 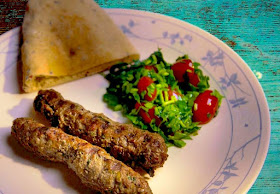 Kofta kebab is another famous dish in the Middle East, it's also served as sandwich with hummus onion and tomato! Therefore I called it : the burger virgin of the Middle East Originally made with lamb, however I made it for this recipe with beef, but it's good idea to have it mixed lamb and beef together, using 1/3 lamb.

Very important on mostly all kaftan's recipe is the smooth texture that comes from grinding the meat twice or more, what I've found useful with almost similar results, using the food processor, only for the steps of the meat and onion, the rest should be handled and mixed by hands.

There are few difference dishes made of Kofta, however when we say "Kofta Kebab" normally meant the charcoal grilled Kofta. The ideal grilling is to permit you to shift the level of grilling heat rack or charcoal, so that you may place the food closer to, or further from, the heat source. Important factor of the art of grilling is to adjust the distance of the meat! Unfortunately this feature is not easy to find at the movable grills.

America's favorite grill, the Weber is good for long, however I used this grill with little trick to achieve the heat distance for controlling the kofta grilling, I sued two charcoal holders, one of them was full and the second one is half, so it gave me high heat for sealing , and medium heat for the desired cooking. 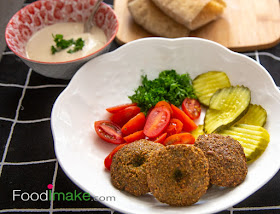 Falafel is very old traditional dish and sandwich at the Middle-East, some say the name Falafel, but I prefer Falafel as we originally pronounce it. Falafel major ingredients is typically consist of chickpeas and other spices, however in Egypt it's made of lava beans instead of chickpeas and called "Tamarah". Falafel is originally made for sandwiches, and here in the US served now in a plate with the sauce and vegetables all comes separately. what's in the sandwich, and what made it so great! Normally couple pieces of "Falafel", Tahiti sauce, parsley, tomato and left"pickled turnip" the last item people some times eat it on the side.
People consider the falafel as the fast food of the Middle-Eastern countries, it's easy to make and healthy, so you find there are many small restaurants, fast food places and food buggies, almost everywhere. Falafel wasn't widely introduced in the USA till the last 15 or 20 years! Thus started being the king among vegetarians, probably for the same reasons: Healthy, delicious and easy to make. 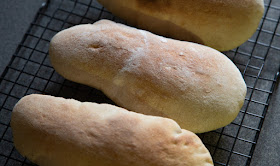 This is one of the few recipes for pita, is very simple and easy to make. I've found that, it's important to use unbleached flour for this recipes, additionally I mixed the white flour with the whole wheat flour, therefore I used two cops of white and one cup of whole wheat, you may use the same amount of flour with white only, if you're white flour fanatic!! At this batch I've found myself had to add an extra half cup of the flour to reach the right consistency after all.

Email ThisBlogThis!Share to TwitterShare to FacebookShare to Pinterest
Home

Food I Make
Food I Make kitchen, sharing our passion for fine food, with touch of the Mediterranean aroma! Also a famous dishes from Lebanon and Syria. Furthermore we're ready to talk about your favorite dish, so please don't hesitate to ask!! My guitar is plying on the background of our cooking as I enjoy as well!! So lets start cooking with music and pleasure.. Cheers!!