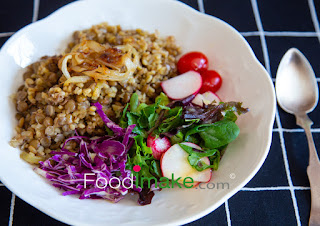 This dish is one of the main diet among the the people at different parts of Syria and Lebanon. The major ingredients at the Mujadarah is the lentil and onion. The lentil may have been cultivated in the Middle East early as 4000 a.c, which certainly make it the earliest cultivated legume. It's little difficult to keep track of, because there are many varieties cultivated in many different countries.
Broadly speaking, there are five distinct groups of lentils in the marketplace. Most common are green lentils and brown lentils, the browns are little smaller then the greens and have slightly deeper taste. Whole red lentils are relatively large, deep-flavored, salmon-colored red that turn yellow when cooked. Red lentils are whole red lentil have been peeled and split, they are less earthy then green and brown lentils, but a little spicy. However the lentil used with the Mujadarah is the green or brown lentil, but not any of the peeled one.

Email ThisBlogThis!Share to TwitterShare to FacebookShare to Pinterest
Labels: Vegan

Food I Make
Food I Make kitchen, sharing our passion for fine food, with touch of the Mediterranean aroma! Also a famous dishes from Lebanon and Syria. Furthermore we're ready to talk about your favorite dish, so please don't hesitate to ask!! My guitar is plying on the background of our cooking as I enjoy as well!! So lets start cooking with music and pleasure.. Cheers!!